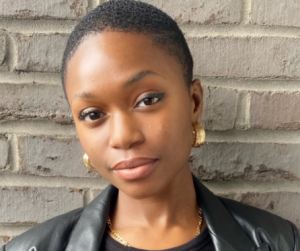 Charlene Chika Osuagwu reflects on the first anniversary of George Floyd’s death – and experiences what it’s like to make a film that changes people’s lives.

After eight months working across two productions for Zinc Media, it is officially my last day here. During my time at the company, I have produced Brook Lapping’s Ian Wright: Home Truths, a single documentary exploring the devastating impact of physical and psychological abuse in childhood, and two glitzy, feature-length episodes for Blakeway’s series about Hollywood in 1939. Cue the old adage: “no two days in TV are ever…”

As most freelancers in our industry can attest, the reality of finishing one job, juggling work offers and moving (hopefully, quickly) on to the next always comes with mixed feelings of dread and anticipation. Although I am super nervous about what is next and when exactly that next may be, I leave the wonderful Brook Lapping greatly energised and optimistic about what is to come.

An article I wrote addressing both the issue and importance of diversity in our industry is published ahead of the transmission of Ian Wright: Home Truths.

It’s funny, when it was first suggested I write the piece, I was reluctant. Other than not really wanting to rehash the (easily answerable) “why is diversity in TV important” question, I honestly did not know where to start.

I spent days staring at a blank screen, fighting over how to begin, sentence structure, paragraph length, tone, font size (erm, why?) – and, ultimately, what it was that I actually wanted to say. In the end, I was honest and wrote as freely and candidly as the word count would allow.

Writing the piece was incredibly cathartic and, based on the warm feedback I received from peers, edifying and empowering for others.

It is the morning after Ian Wright: Home Truths aired. The response has been truly heartening.

Several individuals – colleagues, close friends and strangers – have been in touch to express how moved and affected they were, hearing Ian’s personal story and those of the contributors. For some, the film was a vindication of their own experiences growing up in abusive homes, and, for others, an uncomfortable reminder of events and incidents that they had endured in life.

Many of the charities and organisations involved in helping with the documentary have told us that the programme has already positively affected their sector. In one note, Chantal Hughes, Chief Executive of Hampton Trust, expressed how Ian’s journey had amplified the importance of perpetrator work and the very necessary conversation around the impact of domestic abuse on children.

Accounts like this act as a reminder of just how powerful and transformative our medium and industry can be.

New week, new lockdown rules. The country is one step closer to “freedom” – albeit with the persistent cloud of new coronavirus strains overhead. But, on the bright side, at least we get to (sensibly and cautiously) sit inside a bar this week. British weather is unforgiving.

Today marks the anniversary of the killing of George Floyd – a murder that was seen around the world, and one that turned the name of an ordinary man into the chant of an uprising seen, felt, and heard across the globe.

Since his death, I often reflect on this notion of martyrdom as it relates to the black experience and the exhausting need to reaffirm that black lives – our hopes, dreams and representation, as much as our struggles against injustices – do matter.

I sometimes wonder whether George Floyd would be gladdened by the renewed observance and sense of commitment to racial equality that we have seen permeate everyday conversations, news cycles and workplaces since his death. But I somberly conclude he would prefer to be alive.

A year on, his death continues to drive overdue conversations about systemic and systematic racism in every aspect of our society. This time next year, I hope the same is true and that the need to commit to and ensure racial equality remains fixed in our collective consciousness.